Baby number two, the youngest is already being left out. Here I had this great diary of my first pregnancy and I have no record of this one.

Lets start back in January. We found out the day before we were going to Hawaii that I was pregnant. Pretty exciting for us as we just started to try. I never thought it would happen that fast. I made my first doctors appointment while we were in Hawaii and they scheduled me an ultrasound for 9 weeks. So I saw the heartbeat really early and was excited to know that things were going well. About a month later I became tired and sick. Very hard when you have a little one to watch after. That lasted for about a month and a half. Then one day I woke up and had all kinds of energy to get the back yard done. During the height of the sickness I went in for another ultrasound (14 weeks) for genetic testing. Things came back great with even better results than we had with Nathan. It also came back that baby number 2 is probably a boy. I had another ultrasound at 20 weeks and yes it was a boy and he was growing right on target with Nathan. At 21 weeks (last week) I had another monthly doctors visit and everything is great but I might need a c-section due to complications with Nathan's birth. His shoulder got stuck, this happen is less than 1% of vaginal births. So we are waiting until 36 week ultrasound to make the call on if we are going to do a c-section. I don't want one. The recovery for me sound really bad but on the flip side it is more risky for baby to deliver normal.

As far as cravings... anything sweet. Pastry has been my number one go to food and the weight is packing on with this one. I am up 15lbs already. Where with Nathan I probably was only up 7 lbs at this point.

Well that is baby #2 in a nut shell. We are very excited to meet him and have lots to do to get ready. We need to clean the office so the spare bed can be moved, then we need to sell lots of junk that is in the spare room and we need to move most of books to under the house. Lets hope for a sleeper!
Posted by Laura at 8:37 AM No comments: 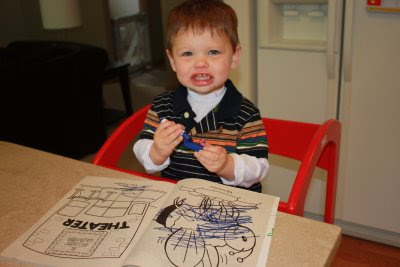 If yesterday is the gauge on how my days will be for the next while I am in for a ride. We had 3 or 4 major melt downs during the day. One of which last 45 minutes on the kitchen floor that involved him screaming "down" while I held him and then followed by him trying to climb me. Dad came home during the ordeal and he wanted nothing to do with him. Another one was while we were getting dressed at the pool, looking back I think he wanted to take a longer shower. At the time I was set on getting him feed and home for nap, a combo that probably didn't help any. So I think part of the language explosion that we have had over the past 2 weeks is his understanding that he has free will and is going to make sure I know about it.

Morning break is over. Got to go grab him out of the crib and hope for a better day today.
Posted by Laura at 6:29 AM No comments:

A friend of Paul's that is a writer by trade did a list of his toddler words translated. http://papaharry.wordpress.com/2009/05/06/day-306-simone-english-dictionary-in-progress/

I am going to take a stab at it.