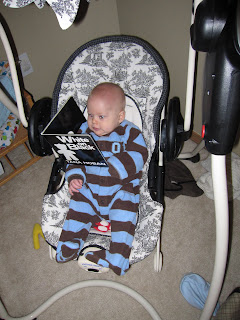 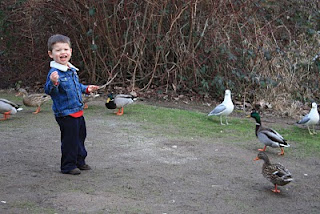 Alex is now 3.5 months old and doing great. He has found his hands and they are normally in his mouth. He is great at assisted standing and sitting. He has all kinds of sounds. Goo, hoo, oooh and ahhh. Bouncing in the bath is his favorite activity. His friends Elliott (Zoe's brother) and Maude (Max's sister) were born at the end of November. So they are only a couple of months be hind him. Max had his second birthday right after Christmas. We got to see him open on present. Nathan helped with the rest. Alex loves to be held when awake. As soon as he is sleeping he wants to be put down in a quiet place. As far as sleep he does ok. Currently he is sleeping from 9pm-1am and then up again at 4 and 6 or 7. This would be fine with me but Nathan has been getting up at 3. Make for a long morning.

Nathan at 2 years and 5 months is doing well also. He speaks to us in full sentences that are usually understood. He can tell us his favorite knock knock jokes. (knock, knock, who's there, impatient cow, moo and butter nut, butter nut tell you) He tells me that I have great ideas. This week when I went to pick him up at Gramies he told me that he lives there now and didn't want to go home with me. I have started to let him wear his Cars and Thomas underwear when we are home. More often than not that leads to an accident. No rush at this point. Nathan is still napping in the afternoon. In the past 3 months they have gone from 2-3 hour naps to 1-2 hour naps.

This past weekend we took the boys Skating with the Zoe family. Nathan wasn't in the mood but did great walking on the skates and seemed to have a little fun going around the ice with dad.

Paul is working hard at his job. They have made some changes at work and he is now in charge of operations and development. They are still working on a title.

I am still at home with the boys. Currently I am working on photo books for 2007-2009. I am also working on finding a preschool for next year. Not a fun task at all.

We are all looking forward to a trip to Vancouver (sans Nathan) for the Olympics in Feb and a trip to Maui in mid April with the Zoe/Elliott family.
Posted by Laura at 1:12 PM No comments: