My brother-in-law, a man in the know of all thing modern, introduced us to www.woot.com. Woot offers one discounted product each day on its web site. Except on days like today where they sell through their left over stock in what is referred to as a woot-off. To make the woot-off even more exciting, one watches each product to see if it is the "Bag O Crap," a $1 grab bag of goodies that sometimes can have expensive electronics items in it.

Our roads leading to our house have been consumed by people walking around in orange vests and large noisy machinery. This includes the house shaking during the day due to all the drilling/pounding they do. This has been going since January and will not end until early summer. They call the project the “Brightwater” project. They are putting in a main sewer line on a road leading to our house and the road now resembles something that looks like a war zone. On the plus side traffic on this road is local access only now. This is so much better during rush hour as people use the road as a way to get around traffic on 522. The down side is we can only leave and come from one direction at any given day. That and the sewer backed up into someone’s house a few weeks ago. That poor family. 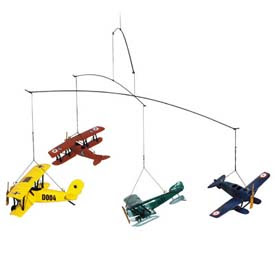 BC had a great Easter. He was busy practicing his hopping around for next year when he will be free to crawl around. He has been moving more and more all weekend.

BC is now a star on a limited addition DVD. He is the feature of the documentary "Week 21 in the Womb" Filmed by the Internal Fetal Medicine of Evergreen hospital. Transferred to DVD and music added by film editor Paul Cooley. Some of my internal organs play a role in the film but they are only there for the support of the star.

I am 23 weeks and 2 days today. I have 117 days until my due date. I have gained about 13 lbs give or take. No major symptoms to complain about. I need to stop bending over after I eat. That is a bit unpleasant. On Friday it was over 70 degrees outside. It was so nice to sit in the sun for a bit. I need to get some shorts that fit because I feel silly wearing Paul’s shorts out of the house.

I have ordered some stuff for the nursery. An airplane mobile and some airplane posters that I will have framed. I hope they get here soon so I can start to pick out some paint and fabric for the nursery. Oh and I need a rocker/glider. Not sure on a color for that. I am thinking navy blue, white, yellow and a bit of red for the colors.