Not sure if you are keeping track but Nathan has been to the ER twice and Alex has been 3 times. Please do let them make it a contest as I am learning to hate going there.

Alex's latest trip was for croup. I noticed the croup cough on Saturday and it only got worse from there. Sunday we went outside in the morning and had a nice time at the park. I think the cold air did him good. Well then he went down for a nap early and woke up struggling to get air in. I called the nurse hotline that said it sounded like stridor so we called 911. They came out and Alex had gotten better by the time they got there. They said to take him to a doctor but wasn't an emergency. We stopped by the local urgent care and pretty much sent me to Children's with in minutes of walking in the door. Children's was great as always. Got us in to see the triage nurse and in a room quickly. Alex hates getting his blood oxygen levels taken and blood pressure. We got into a room quickly and they gave him the breathing treatment. Wish I would have seen what his O2 levels were but after the breathing treatment they were back to 100% when it was done and 97% after a hour. We had to stay in our 12x12 room for 3 hours for monitoring. The first hour was easy as Alex was exhausted from the day. We watched Wally. The second hour wasn't too bad as I had grabbed a ball from the car before we went in. We tossed that around, played iphone and drew on the white board for the second hour. The third hour was hard. Alex hadn't eaten since 11am it was now 5. We got some water and I should have asked for some crackers for Alex. He was done being locked in the room was banging on the door window to get out. Paul showed up with food at 5:30 and we all had a picnic on the bed while they took Alex's stats. He was fine and we were going home at 6.

Two things I learned. Even if you are told it isn't an emergency by a paramedic go with your gut feeling, you know your child. Second bri 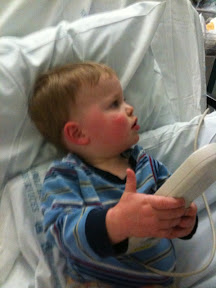 ng food, water and toys to the ER as you might have a long wait.

Do you guys have a "coffee kit"? It makes surprise stops (ER, restaurant, friend's houses who don't have kids..) a much better experience.

Ok super mom. I will make one as I am sure this is not our last trip.